Help our museum: Show your support!

The Cold Spring Harbor Fire House Museum is home to many relics, historic equipment, and photographs dating back hundreds of years. Above all the enriching history and memorabilia the museum offers, the most important finding here is opportunity. The opportunity to reflect on the strength and depth of the commitment of our neighbors who fought for over 168 years have given of their time to serve their community as volunteers. What guests can expect to see and learn about upon their visit at the CSH Fire House museum is listed, but not limited to, the collection below:

9.11 Memorial
In August 2011, our Museum opened a permanent memorial in celebration of the lives and valor of the 343 New York City Fire Department Firefighters and Rescue Personnel who perished on September 11, 2001.

Encased in a glass tower, a remnant of steel from the World Trade Center is overshadowed by the names of the firefighters, etched into the glass, who perished on that fateful day. Although diminutive and irregular in size, it clearly holds special meaning.

When the memorial was installed, those present who had given their time and labor to create this cherished exhibit proudly and humbly stood in silent tribute to the memory, lives, and souls of those who perished. The memorial stands with distinction to be seen by all who visit our small museum. Its lights remain on at all times reflecting over the names of our heroes as they rise above the steel in the shadow of our American Flag.

Fire Pole’s History
The addition of the “fire pole” or “sliding pole” to the Museum is a very special enhancement to our collection. What was once located in a New York City Firehouse, playing an integral role in the fire department’s efficiency, was donated to the CSH Fire House Museum with the kind assistance of the New York City Fire Department, Commissioner Salvatore Cassano.

Whenever there is a fire, time is the enemy, the more time it takes to leave the firehouse and get to the fire, the greater the risk of loss. Historically, most city firehouses were three stories high. The first floor housed the fire wagons and horse stalls. The fireman lived on the second floor and hay was often kept on the third floor. Before the advent of the Fire Pole in 1870, when an alarm sounded, the firefighters would descend to the first floor via a difficult to navigate spiral staircase, put on their gear, harness the horses, board the fire wagon and go to the fire. Straight staircases were infrequently found in firehouses because of difficulties encountered when horses would climb them in search of hay. With the advent of the “Fire Pole”, firemen were able to descend from the Fire Station’s second floor living quarters to the ground floor in split seconds, thereby decreasing the time it took to respond to a call. The Fire Pole continued in use in most firehouses until recent years when its use was prohibited by OSHA and other regulations because of injuries sustained by responding firemen. 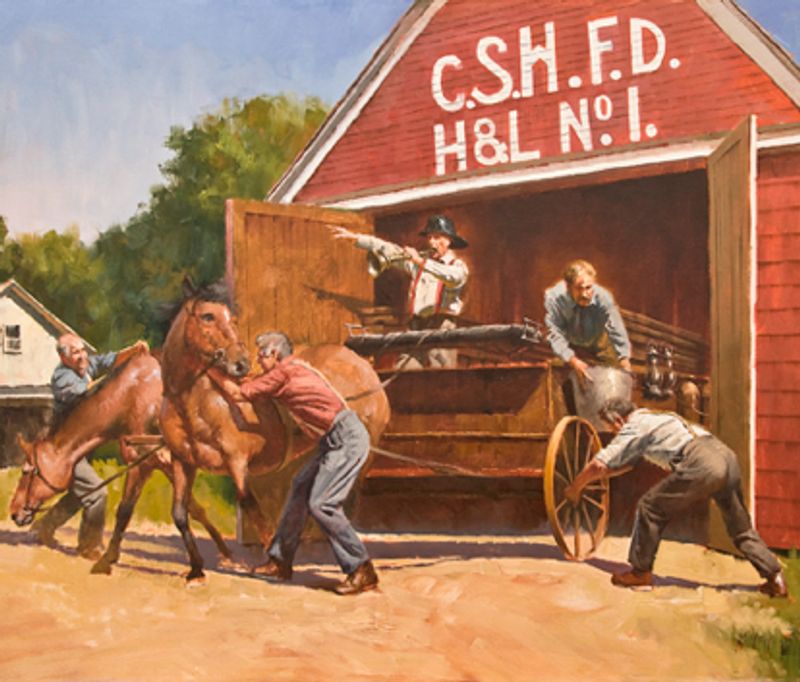 "Nice history on the towns firefighters. The kids were allowed to take pictures in one of the older trucks. Some great artifacts that were used to combat fires from the 1800s to the early 1900, and even used by some modern firefighters."
- Jeremy C.

"We had a nice private tour with Bob on a quiet, late Sunday afternoon. Lots of fire history and lore surrounded by great restored equipment, photos and historical artifacts. It's a big little museum."
- Kat Mc.

Sign up to hear from us about specials events or promotions.

We Invite You to Step Into the Past

Learn the evolution of fire fighting and it's history in Cold Spring Harbor.

Arrangements for tours, school groups, or special visits can be made at any time throughout the year by contacting the museum.

Interested in becoming involved with the Cold Spring Harbor Fire House Museum? Check out how you can contribute a donation to support the CSHFD and the community it serves.